Today, Ryder competed in his first official tri, YMCA Strong Kids Triathlon at the Arapahoe Y in Lafayette, CO.
We are all so proud of Ryder. Team Hutton was out in force cheering him on and enjoying the event. Taggart is looking forward to next year's competition already...too bad we couldn't get his cast off earlier. Piper may need to wait a few more years. Congratulations Ryder!
Posted by The Hutton Family at 11:57 PM No comments:

Today was the first Team Hutton family (minus Piper) outing to Coors Field to watch the Colorado Rockies take on the Chicago Cubs. To start the day, the boys woke up to new baseball gloves and Rockies hats.
On any other day, we would have cheered for the Cubbies but today we all decided that we had to cheer for the home team. Go Rockies!
The boys were so excited to be there but slightly hot as the temperatures exceeded 90. The hot dogs and pizza seemed to make everything better.
An incredibly nice and generous family walked up and said they were leaving and wanted to know if we wanted their 4th row seats next to the dugout. This occurred right after a woman asked if the boys wanted a Troy Tulowitzki bobblehead.
Taggart was fortunate that Rockies first base coach Rene Lachemann spotted his cast and asked him to come down and talk to him between innings. Tagg was so excited.
As we left the game, Ryder said, "This is the best baseball day ever. We got new gloves, new Rockies hats, ate both hotdogs and pizza, seats next to the dugout, a bobblehead, a game ball and the Rockies won!"

What an incredibly special day for the boys. One that we hope they will remember fondly for many, many years. Nothing better than watching two impressionable little boys take in the atmosphere at the ballpark. We are all looking forward to future games.
Posted by The Hutton Family at 8:33 PM No comments:

Today, Taggart received his full arm cast after the orthopedic surgeon confirmed that surgery was not necessary. He was so excited to pick out his cast color...he chose "glow in the dark"! Tonight should be interesting.
Best news of the day is that they break did not look too bad and they hope to take it off in 3 weeks.
Posted by The Hutton Family at 1:36 PM No comments:

Daddy and Taggart ended the Fourth of July weekend at the University of Colorado Children's Hospital. Unfortunately, Tagg fell and broke a bone in his elbow. 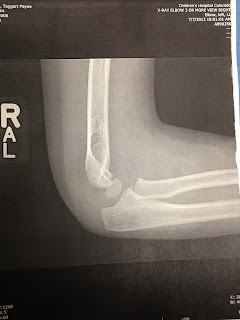 Back to the Orthopod we go later this week. Surprisingly, this was the first broken bone....we doubt that it will be the last.
Posted by The Hutton Family at 2:11 PM No comments:

It really doesn't get more American than ending the day with s'mores.
The next day we headed out for a family hike in and around Beaver Creek.

Posted by The Hutton Family at 1:52 PM No comments:

For the Fourth of July, Team Hutton headed to Eagle County, CO to spend quality time with Nana & Papa Leveque. The festivities kicked off the night before with the Avon fireworks. The next day we headed out early for the Annual Fourth of July Vail Town Parade.

Posted by The Hutton Family at 1:44 PM No comments: